The Canary Islands are located in the Atlantic Ocean, around 100 and 200km off the west coast of Morocco. While geographically being a part of the African continent, the Canaries politically are one of the 17 self-governed regions, in which Spain is divided. Tenerife has an extension of 85km, a surface of approximately 2,000km² and is the largest island of the Canary archipelago. Its center is dominated by the Pico del Teide that, with its altitude of 3,718m, is the highest mountain throughout Spain. 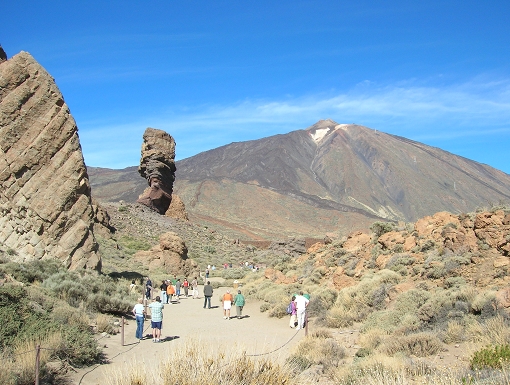 On the island, there are three important mountain ranges, each of which with different features: the mountains of Teno, the Anaga range and the Cañadas del Teide. The Teno Mountains are located on the northwestern tip of the island. It’s a wonderful landscape, where one can find a variety from smooth hills to steep cliffs that fall into the sea. In January, we have found a rainy and green landscape at a temperature of 10ºC, which has made us feel like in Scotland. Possibly, in September this landscape that we have experienced recently will have turned into a place of yellow and brown colors after the dry period of summer.

According to geologists, some 170,000 years ago, there was a volcano in the center of the island that was even higher than the Pico del Teide at present. After the theory, this volcano sled into the sea on the northern side of the island in a giant landslide. As a result, the 15km wide high plateau of the Cañadas was formed, which is bordered by the walls of the old volcano’s lava dome on its southern side. A new volcano with the name Pico del Teide emerged at the northern end. The sea-side slopes of the whole formation are covered with forests of canary pine trees forming the well-known “Corona Forestal”.

In the northeast of the island you find the Anaga Mountains. Like the mountains of Teno, they reach an altitude of 1,000m. In this place you find the largest laurel forest of the Canary Islands, which in the past occupied a much greater part of the island’s surface. 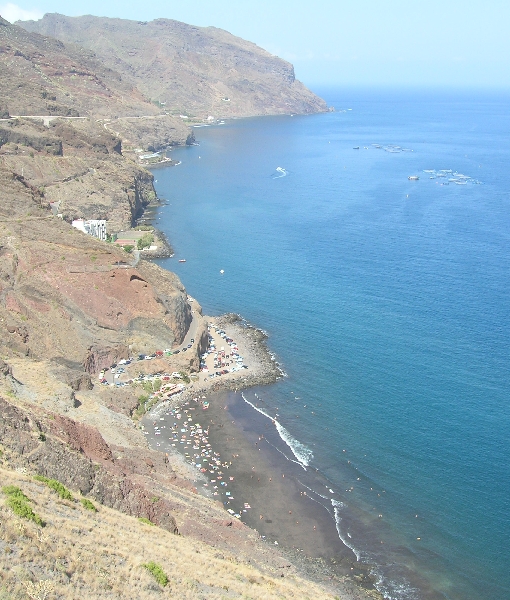 Las Gaviotas Beach in the south of Anaga

Being situated at around 30 degrees of latitude, the Canary Islands offer mild temperatures during the whole year. At sea level, the thermometers oscillate between an average daily maximum of 25ºC in summer and 20ºC in winter. During the winter months, it regularly snows on the Pico del Teide. In Tenerife, the average precipitation is of 400mm, which is distributed unevenly over the island. Whereas being close to average on the north coast, in the forests of the northern mountain slopes the rainfall is up to 1,000mm per year and precipitation in the south of the island only amounts to 150mm. For this reason, in general it is cloudier in the north where humidity accumulates on the mountain slopes than in southern Tenerife. This also determines the type of vegetation and landscape on each side of the island.

Tenerife has a population of 900,000 inhabitants. The biggest city of the island is the capital city, Santa Cruz de Tenerife or Santa Cruz as it is commonly referred to. A few kilometers above is San Cristóbal de La Laguna, or La Laguna, well-known mainly for being the university city. In total, both cities, which are connected by a new tramway since 2007, have a population of 370,000 inhabitants. 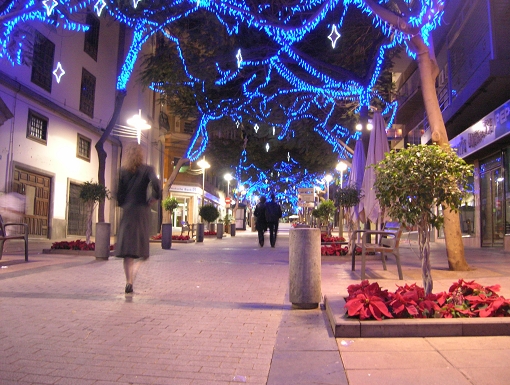 The main tourist centers of the island are in the south at Playa de las Américas (not “Playa de los Americanos” as some call it erroneously) and Puerto de la Cruz in the north where the first tourist boom on Tenerife started. While British tourists prefer the southern coast to spend their holidays, Germans are often more attracted to the north of the island.

On the following pages, we provide you with some information regarding your visit, like flights, accommodation and means of public and individual transport on Tenerife.

Aside from the information on our page, we also would like to recommend you the site of the Cabildo Insular de Tenerife todotenerife.es, which offers a lot of well-structured information about the island. The web site webtenerife.com offers news and information about events. For the Spanish speaking amongst you, there is also a very interesting documentary about Santa Cruz and La Laguna from the year 2003 (if the first link does not work, you can also find the video here in a smaller version).